Legendary Games brings you an epic sword & planet adventure saga for Pathfinder and 5th Edition that takes you across the multiverse! Come support us! Pledge Here 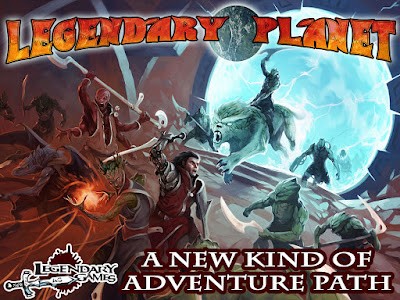 Interplanetary Adventure, New Worlds, Ancient Civilizations, Alien Species, and more, with a delightful mix of magic and technology, with a dash of psionics and mythic challenges! Legendary Games brings you an eight-part, sword-and-planet adventure path; authored by some of the biggest names in the RPG business. Legendary Planet will take your characters across the multiverse, traveling alien gateways created by ancient, god-like beings to exotic worlds and back again in an incredible campaign like none other. Sword-swingers and spell-slingers stand alongside scoundrels and seekers for cosmic enlightenment as they  unravel conspiracies and cryptic alliances bent on universal domination... or annihilation!

This epic saga begins with an optional prelude adventure, for those who would rather begin their campaign in a more traditionally prosaic fantasy setting, a pastoral world to which only the first fingers of alien influence have yet been stretched. 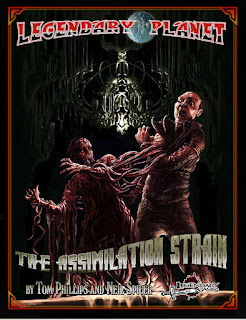 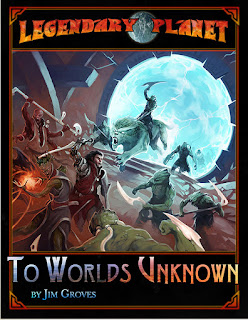 The Assimilation Strain is a 40-page prequel adventure written by Tom Phillips and Neil Spicer for 1st to 2nd level player characters.

A strange sickness afflicts the frontier settlement of Holver's Ferry, threatening to overwhelm its citizens with an alien madness. Already the town has nearly torn itself apart, and the local sheriff is missing. When the PCs brave the surrounding wilderness as the village's latest newcomers, the beleaguered townsfolk desperately turn to them for assistance. But can these erstwhile heroes trace the diseased carrier to its source and solve the mystery before they, too, succumb to The Assimilation Strain?

To Worlds Unknown is the first chapter in the adventure path written by Jim Groves, a 64-page adventure for 2nd to 5th level player characters.

Fire. And a choking haze of smoke blurring the luminous glow of strange lights on the walls and floor. Shouts. And an ever-present ringing in your ears, piercing your brain with the sharp trauma of an urgent alarm. You stumble from a bed you don't recognize, and into the path of strangers you don't know--some disturbingly alien, yet all fleeing an unknown catastrophe. Where are you? How did you get here? What is happening? There are no easy answers to these questions. But your opportunity to discover them starts now. And they're destined to take you To Worlds Unknown.