My first published RPG works are in this book. I wrote two archetypes. So if for no other reason you should get it for that! No seriously, this is an awesome book. Check it out:

LAYING WASTE: THE GUIDE TO CRITICAL COMBAT IS NOW A SILVER BEST SELLER!

If you haven't already gotten your hands on this amazing critical hit sourcebook, you should.  This is one of those guidebooks that should be part of every gaming group.  Laying Waste modifies the standard critical hit rules to ensure that every critical threat roll is of some value to you, and replaces the sheer hit point destruction of standard critical hits with 600 critical hit and fumble effects.  The critical hit effects are expanded into light, moderate and severe effects as well, keeping balance at the various levels of play.  Better yet, your skill at arms is richly rewarded with this system, meaning that a goblin with an axe is not likely to decapitate you, but a 20th level warrior even with a dagger becomes something to be feared.  Also included are over 100 feats, new magic equipment and 16 martial archetypes!

Our newest adventure The Fen of the Five-Fold Maw (on Kickstarter now!) is also going to be designed to be Laying Waste Compatible.  That means that while the stat blocks will contain all the normal information, it will also have all the severity check bonuses and critical damage listed for you.

Don't take my word for it though, check out what the reviewers have had to say:

"Streamlined, Brutal, Bloody, Ingenious...  Murdering Mayhem with fountains of blood and more cheers for critical hits than one could ever hope for." -Erik F

"Do you want your critical hits not just to do damage to your foes but to do spectactular damage that will have people talking about your mighty blows for weeks, years even? Do you want every 'natural 20' roll to have a significant effect irrespective of what the confirm critical roll comes up as? Look no further...  Aging gamers may recall the brilliantly cinematic critical hit tables from the Iron Crown Enterprises' game RoleMaster, and I'm sure I'm not the only person who reused them with other rulesets. Here, though, is a system written for use with the Pathfinder ruleset, mechanics honed to work directly with that system. Of course, fumbles are included as well, and the whole is an elegant way to make combat spectacular and exciting." -Megan R.

Over three hundred people supported this massive project on Kickstarter, and helped vet the mechanics through a year-long playtest.  It's a silver best seller and unanimously been given 5-star reviews.  A number of people have called this book canon in their home games, and we hope you will too.  Grab a copy today in print or PDF! 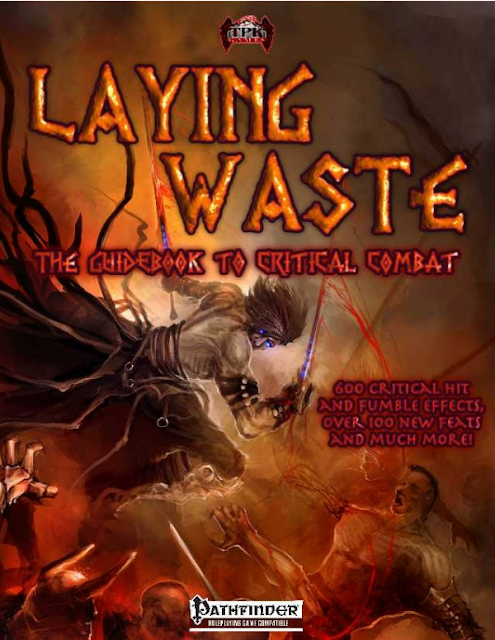